I’ve choose a swordsman as my character profession because I wanted to try out Knight, you know those holy warrior with strict code of justice wannabe :p 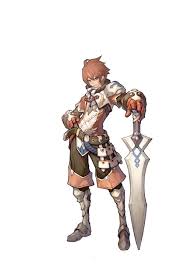 I rarely play a tanker or melee class in most of my online games, to be honest I think that sometimes you need to change to other classes to try out new things and play style.

I Am currently Level 13 and the reason I am writing this blog is due to the log in timeout problem that occurs to the server…….. : (

Don’t bother much about your equipment and just take every single quest you can get and please party up even with unknown people as it really helps you in clearing quest fast.

Along the way remember to collect minerals or crafting materials according to your Job, this not only allows you to level up your job faster but you can also sell the materials in auction house when you reach Prontera City.

What to Choose for Combat Class and Job ?

It is up to you but I recommended Swordsman for blacksmith as you can craft your own weapons and armor later on the games, you don’t need any light or cloth armor…… chef might be good for you as food will provide buffs after being consumed.

It takes a full party and I recommend to have a healer with you as the boss attack its quite painful. Shout for party as the title “Lurker Hunter” provide you one of the best stats booster available in early game.

The Lurker is near a red mobs call summon dunno what its a female monster with a staff after the second flying service girl u saw….. sorry that I cant provide the exact location as I can’t log in to the game.

What Should I Prepare ??

In early stages don’t worry much about Cards or Equipment the first thing you have to do is get all medium bags or small bags so you will have slots for your loot. I faces some problem during level 7 as I don’t have enough slots for newer items. So make sure you clear up your bags and get bigger bags!!!!!

Here’s a video for you all Enjoy~~~

Hello everyone, my name is Guttzu and welcome to my guide/review of the Warrior profession in Guild Wars 2. I want to start out by saying how impressed I was by the gameplay of Guild Wars 2. I played the game for the first time in the BWE3 but I was very pleased with how well everything flowed in sPvP. The maps were fun and the graphics were appealing. I played a warrior for 4 years in WoW but the UI and feel of Guild Wars 2, to me, surpasses WoW. Here is a little bit about my PvP past… I competed in high level arena during seasons 2 and 3 of WoW so I thoroughly enjoy the melee class which is why I stuck with Warrior for GW2! Ok enough about my gaming history; let’s get started with the build/review!

*** This guide is intended for use in 5v5 or 8v8 sPvP. The build is focused around Greatsword + Axe/Shield and the Hundred Blades/Eviscerate weapon skills. I will keep this guide updated with other viable specs and playstyles. ***

Here is a link to the build:
Link to Build

Here is a quick link to all the warrior skills on GW2 Wiki: http://wiki.guildwars2.com/wiki/List_of_warrior_skills

So you are saying to yourself, “Hey I want to play a warrior so I can run into battle and just button mash and kill everyone yeah, come at me bro!!!” As much as I would like to say that is the case for warrior in GW2, sadly, it is not. This build is more focused around timing your cool-downs and knowing when to burst a target down. I found the warrior to actually be a little squishy with this build but you have good mobility and can get around in combat. Your main focus as a warrior is to dish out consistent DPS and pressure a target until you need to burst them so let’s get into a list of skills and what they mean to you as a warrior. Note that you can reference all of these skills in the “warrior skills” link above.

– I didn’t include the Greatsword burst skill because I never used it. –

The Actual Build and Traits selected

MainHand/Axe: Sigil of Intelligence – Your next attack after swapping to this weapon in combat has a 100% critical chance.

OffHand/Shield: Sigil of Superior Battle – You gain 3 stacks of might for 20 seconds when swapping to this weapon while in combat.

Superior Rune of Divinity: +10 to all stats and 3% critical damage

This is the warrior from Super Squad – Fredzw:

– Here is a link to his build: http://www.gw2build.com/builds/super-squad-fredzw-balanced-build-super-squad-fredzw-warrior-894.html
– You will notice that it is much more balanced than the typical glass cannon build. He uses Mace/Shield for his swap and the traits are more focused on survival.
-He is running Banner, Balanced Stance, For Great Justice, and traits that make shouts heal. This build is more about surviving the team fight while buffing teammates but still doing decent damage. The Mace/Shield gives good stuns and cc.

Thank you for reading and I hope this has given you an insight into the warrior class. I will keep this guide updated and add to it after the game launches. Maybe add sections on matchups and other things. I learned a lot about the warrior class by doing this guide and I feel like it has made me more aware of what my class can do.